One of Universa Blockchain’s partners, the Blockchain and Cryptocurrency Association, has joined forces with the Joys Platform to roll out a new payment system.

Universa Blockchain and two other partners, including BRICS IT, are working together in launching a Digital Bank project to process transactions for the BRICS member countries, the Russian Association of Cryptoindustry and Blockchain (RACIB), reported on Jan 31.

RACIB, an association focusing on cryptocurrency and blockchain in Russia, has over 2,000 members and is active in regulatory advocacy. In the recent past, under the request of the Expert Council of the State Duma Committee on the Financial Market, they submitted an analysis on several bills.

As per the RACIB report, the project, dubbed the BRICS Digital Bank project, will be headquartered in Switzerland. The European country offers a favorable environment for DLT companies and has friendly rules.

The Universa Blockchain will power the bank’s operations, aiding in processing crypto transactions.

China is the world’s second-largest economy after the United States, with Russia, Brazil, and India in the top-10.

Due to the disruptions of the coronavirus pandemic, the implementation of emerging technologies like blockchain and Distributed Ledger Technology (DLT), in finance, Alexander reckons, aids in fast-tracking financial inclusion.

Accordingly, the Universa Blockchain will play a role in promoting blockchain adoption and driving awareness to millions, helping them enjoy the advantages of technology in finance.

Oleg Sobolev, the Vice President of the New Silk Road BRICS, a blockchain-based platform that issued the first coins under the BRICS blockchain project, said technological co-operations are important in accelerating the development of the banking project.

He further revealed that one of Universa Blockchain’s partners, the Blockchain and Cryptocurrency Association, has joined forces with the Joys Platform OÜ, an organization enjoined with the BRICS Business Council, to roll out a new payment system.

Later, in September 2020, based on Universa Blockchain, the Dubai Multi Commodities Centre (DMCC), an entity formed by the Government of Dubai, in partnership with Al Khaleej Sugar, rolled out the DigitalSugar Trading Platform with support from the DMCC Tradeflow.

The portal is the first to facilitate the spot trading of sugar, a divergence from other derivatives platforms.

How Bitcoin’s Taproot Upgrade Will Improve Its Software Stack

Historically, stimulus checks have been pumping the cryptocurrency market. Let us see if we see another round of bullish marathons this time. Today’s picks are AAVE, LINK and ETH.

There was a theory that whenever the US Stimulus bill was accepted, the cryptocurrency market will skyrocket and the signing of the Bill by President Biden will establish a new bullish cycle. Yesterday, March 6, the Senate approved the $1.9 trillion bill, on Tuesday the House Democrats are expected to pass the bill and President Biden is expected to sign the bill this coming week.

As for the announcements and updates, Aave has partnered with a Lichtenstein-based crypto wallet and exchange Nash to integrate DeFi earning products by Aave and Aave token will be available to trade on Nash. As Nash currently supports Circle’s digital USD, it is assumed that the first tradeable pair will be AAVE/USDC, whereas adding other pairs such as AAVE/ETH is expected as well. The total value of AAVE locked in DeFi has significantly increased in the past 24 hour, adding 7.4% in USD, making $4.984B in total value locked.

AAVE/USD shows strength by breaking out of the descending parallel channel. The best price action for the pair would be the test of the dynamic resistance (the upper edge of the channel) as support and continue upwards to test resistances at $495 and $594 above that.

Chainlink has partnered with yet another DeFi protocol Swingby. Swingby will use Chainlink to match prices in its inter-chain swaps. Chainlink is moving to FX now with expanding its oracle network to support price data of non-crypto currencies with the launch of EUR/USD. As the company declared on their blog, the FX EUR/USD pair is already used by derivatives protocol Synthetix. While exchanges pull data from FX liquidity providers to offer FX pairs on their trading terminal, Chainlink brings the most accurate FX data into DeFi and blockchain. The accuracy of the data is provided by the many oracles which aggregate the price and the network accepts the most accurate among all Oracles.

LINK/USD stays above the dynamic support of the ascending channel and above the 50MA on a 4-Hour chart. The further advancement of the price was stopped by a strong resistance at $28.600, breaking of which will lead to a jump towards $31.4700 and $33.000. It is highly recommended to watch for the touching of the upper edge of the ascending channel by LINK/USD at any point, as there is a strong resistance.

Ethereum was one of the coins to highly cheer the Stimulus bill by adding 8.38% to its value yesterday. This week Ethereum hit another record with the total ETH locked in DeFi on March 5 reached $8.876B, helping ethereum price to jump after a decline of the price. 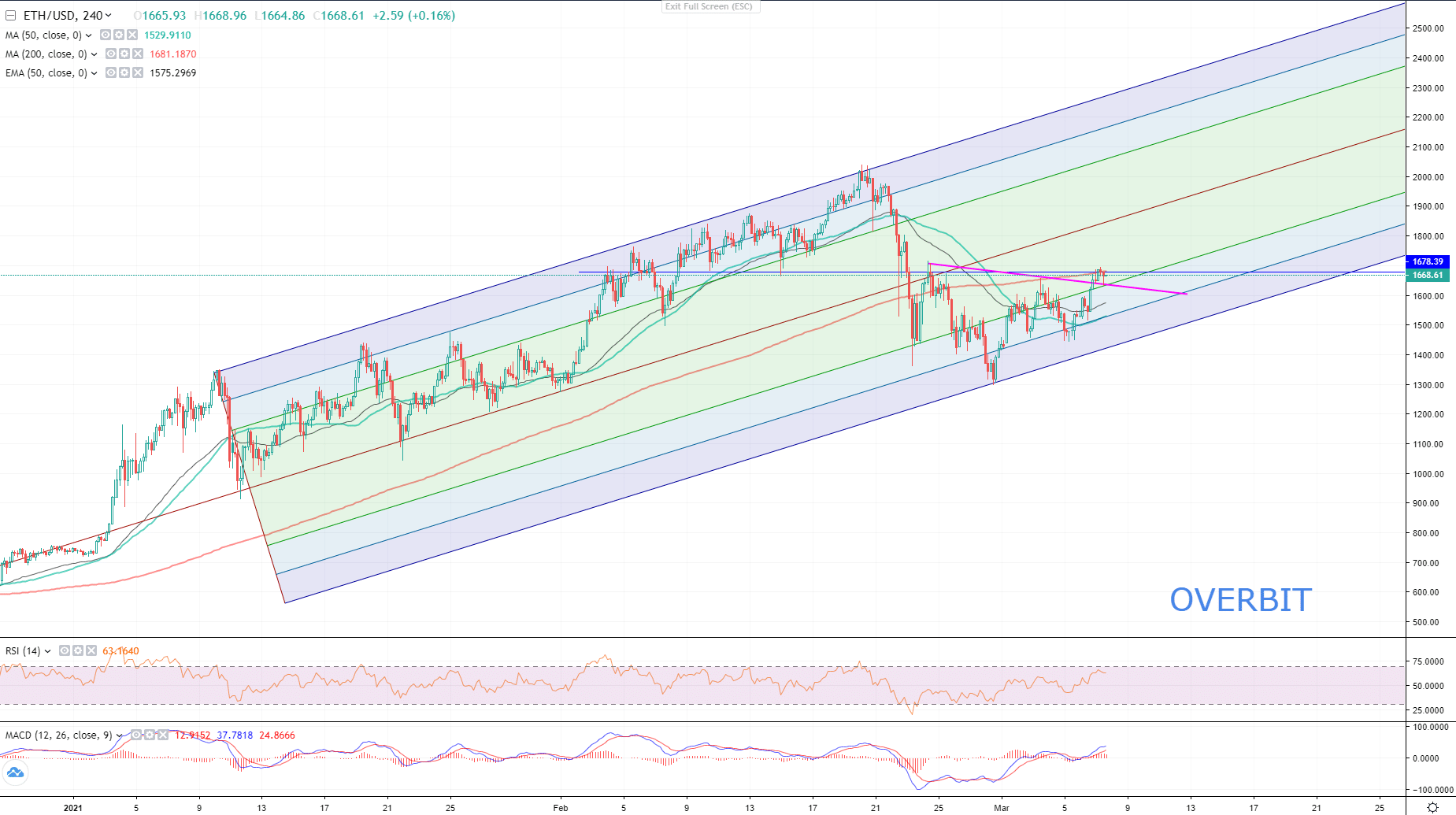 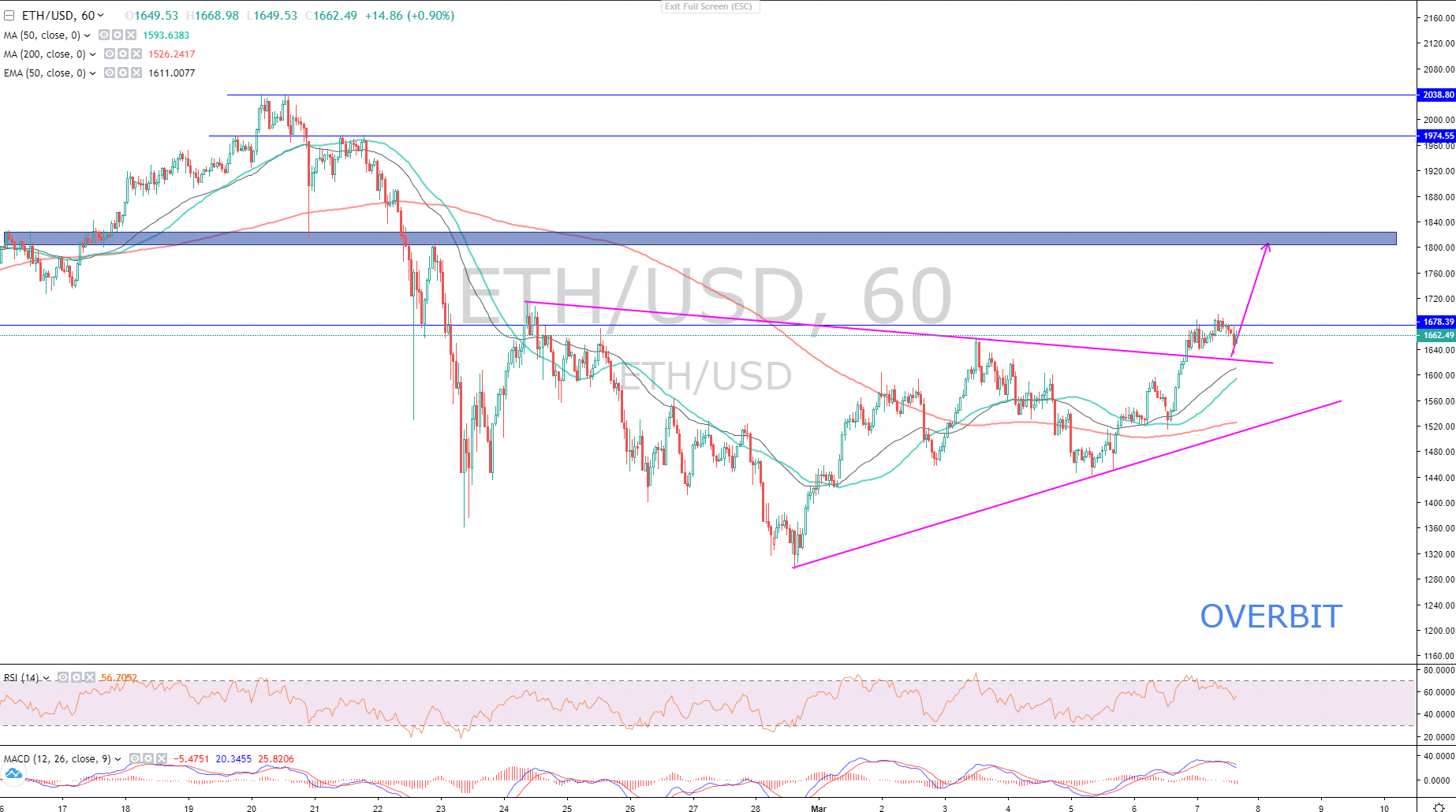 An hourly ETH/USD chart clearly demonstrates that Ethereum is on a bull phase. The pair has completed a breakout from the triangle, the move which supported the breakout is impulsive, the price retested the dynamic resistance as support. There is one obstacle to overleap at $1680 and Eth can advance upwards to test another strong resistance area laid at $1805 – $1825 area.

How Could It Affect Bitcoin?

While the COVID-19 pandemic has slowed down markets worldwide, especially the US stock market, several investors and traders went after alternative assets and options that could provide them a better store of value.

The United States Senate approved by a 50-49 party-line vote a $1.9 trillion coronavirus stimulus check, a plan already announced by Joe Biden at the beginning of January. This COVID-19 package relief includes the third round of stimulus checks that will be passed to president Biden, with a deadline of March 14 to make changes to the package before Biden gets to it.

What Does the COVID-19 Package Relief Plan Provide?

The COVID-19 package relief will include a series of direct payments to help boost the economy, hit by the coronavirus pandemic in 2020:

Why Is This Vital for Crypto?

When institutional investors and companies, like PayPal, Grayscale, and Tesla, started hoarding Bitcoin, many realized that BTC together with several altcoins, changed from just being a medium of exchange to become a better hedge against value decreasing fiat.

While the weather in the US is uncertain regarding cryptocurrencies, this would likely act as a boost for most digital assets, reaffirming the need for better financial methods as changes are taking place in the world, and most economies can’t rely on the same classical methods of printing money every month for citizens.

Back in February, Janet Yellen made several mixed statements about crypto, specifically, Bitcoin, calling it a “special concern” by outlining how crypto-assets are being used for “shady businesses”. Yellen added that Bitcoin and other cryptos can be used for financing terrorism, but a report by Chainalysis highlighted how Bitcoin only accounts for 0.34% of terrorism-related transactions, keeping the US dollar as the preferred currency chosen by terrorists.

In the last 24 hours, Bitcoin has recovered 0.50% in price, trading in volumes of $49k, with a decent bullish index showing demand is still strong.

I’m a finance journalist and copywriter with a keen interest in the fintech field. I have keen on blockchain technology and cryptocurrency and I believe it can reshape the way we see money and financial freedom.

The EIP 1559 is a welcome move for Ethereum users that standardize the transaction fee across the network and reduces volatility. However, mining pools have placed a strong opposition to it.

As per the latest development, July 2021 is the scheduled period when the Ethereum Improvement Protocol (EIP) 1559 will go live. As per Ethereum’s core developers’ call on Friday, March 5th, five other EIPs along with EIP 1559 are likely to join the London hard fork.

The Ethereum fraternity has been eagerly awaiting the launch of EIP 1559 amind issues of the transaction fee. The ongoing EIP 1559 helps to lower the volatility of transaction fees on the Ethereum blockchain. Besides, it also fixes several ongoing issues with Ethereum’s user experience.

Traditionally, a user sends the gas fee to the miner to include the transaction in the block. However, with the EIP 1559 implementation, the gas fee shall go to the network itself in the form of “burn”. The “burn” is also dubbed as basefee with only an optional tip paid to the miners.

The Ethereum algorithm sets the “burn” fee thereby making it easier for users to pay a fair price. Thus, EIP 1559 replaces the supply/demand auction-style system with a standard rate implementation across the entire network. Ethereum creators are confident that the proposal will be “positive ono the long term price” of Ethereum. They say that a lower and predictable gas fee ensures that Ethereum isn’t only for the rich.

This new proposal has received solid support from users and the creators of Ethereum. However, it has garnered strong opposition from the miners and the mining pools who have been on the receiving end.

Ethereum miners have enjoyed solid revenues recently on the backdrop of the high DeFi activity on the Ethereum blockchain. In February last month, the total mining revenue clocked a massive $1.3 billion with the average transaction fee striking an all-time high of over $37. As per data by CoinMetrics, 50% of the revenue came from fees alone.

The surge in transaction fees and the ETH price has shot up the network has power to more than 100% in a year’s time. Flexpool, a minority mining pool, has launched a marketing campaign against the EIP. It has also received support from majority pools like sparkPool and Ethermine.

Nearly 60% of the Ethereum hash power is currently against the implementation of the new proposal. Interestingly, F2Pool is the only largest pool in favor of the EIP with 10% hash power.

However, mining pools have few options to stop the EIP 1559 implementation. The bigger danger that currently hovers around is the 51% attack on the Ethereum network. However, the chances of this remain unlikely at this moment considering different financial incentives for not attacking the network.

Bhushan is a FinTech enthusiast and holds a good flair in understanding financial markets. His interest in economics and finance draw his attention towards the new emerging Blockchain Technology and Cryptocurrency markets. He is continuously in a learning process and keeps himself motivated by sharing his acquired knowledge. In free time he reads thriller fictions novels and sometimes explore his culinary skills.